History of the Graphonic® Gasket

The Graphonic® gasket was developed by M&P and Dow Chemical in 1987 as a replacement for asbestos gaskets used by Dow in their Freeport, Texas plant.  M&P went through many designs until developing a corrugated metal-plate, graphite encapsulated gasket that worked well in lab tests.  The performance in the Dow Chemical plant was unbelievable.  Some of the applications included steam, hot oil, and various thermal cycling applications.  The Graphonic® gasket reduced fugitive emissions to almost zero, and Dow maintenance personnel evaluated the gasket as the best in all applications.  It was even deemed better than the asbestos gaskets it replaced.

At the time, the gasket had no name.  One of the maintenance supervisors called the gasket “The Bionic Gasket,” and this started the process.  After weeks of submissions for naming the gasket, the name “Graphonic”® evolved from the words “graphite” and “bionic”; thus, the Graphonic® gasket revolution was born.

Graphonic® was the beginning of a sealing revolution.  M&P retained the École Polytechnique de Montréal to certify lower-seating bolt torques with tighter sealing, while the Southwest Research Institute certified Graphonic® using the Exxon Fire Test.  Their test results rated Graphonic® the best gasket that they had ever tested.

M&P was awarded a patent for the Graphonic® gasket and received numerous written specifications in plants around the world.  Many gasket companies, who had written off this technology as a fad or hoax, began finding ways around the patent, due to what appeared to be an overnight success.

Soon after the patent award, Garlock made an offer to purchase M&P.  For legal reasons, Garlock was unable to purchase M&P Sealing in Orange, Texas, and a group of the original M&P owners agreed to purchase M&P’s Orange operation.  The purchase terms allowed M&P Sealing to continue making Graphonic®, but they could not use the name; therefore, M&P renamed Graphonic® to CORR-A-SEAL. 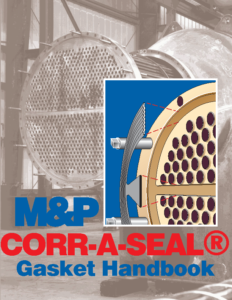